At age six, Bedros Keuilian was dumpster-diving to find expired but still edible food to feed his immigrant family as his parents and brother scrambled to earn money for their rent.

“I was the bread-winner of the family,” Bedros quips on an Ed Mylett video.

The “communist” from the former Soviet Union to “serial capitalist” in America, Bedros Keuilian is the founder and CEO of Fit Body Boot Camp, one of America’s fastest growing franchises.

In the dumpster, Bedros found a Herman Munster sweater that he wore to grade school. For the next three schools he attended, he was known as “Herman.”

Still, things were better in American than under communism. He calls himself a former “communist” because if you don’t sign up for the communist party, you get shipped off to Siberia, he says.

His father did tailoring on the side to save money to bribe the Soviet Consulate in 1981 to grant the visa so they could travel to Italy, where they applied for a visa to come to America. The KGB suspected he was engaged in “unauthorized capitalism” and raided his house various times, lining up Mom, Dad and the kids, while they searched in vain for needle, thread, cloth, anything that might confirm rumors that he was moonlighting as a tailor. He was good at hiding things, Bedros says.

There’s another very dark story in his background. Bedros was sexually abused by older boys in Armenia. His parents were unaware of this but when they saved little Bedros from communism, they also saved him from further exploitation.

The shame and rage boiled in the back of his mind and made him a terrible student and later a criminal who stole cars and ran from the cops.

Ultimately, Bedros learned to tame the raging beast in his bosom through Christianity and counseling. He became a better husband and a CEO. The beast, he says, caused him to sabotage his own businesses. He was unwittingly playing out the scenarios of his childhood until he learned to overcome them.

Today, Bedros also has a ministry to help called Fathers and Sons, a group he formed as a result of his own bungling as a new father.

His motivational speaking business doesn’t downplay but rather showcases his Christian faith: “Adversity is the seed to wealth, success, and even greater opportunity,” his website proclaims. “Look at Jesus Christ, he suffered to forgive us of all our sins.”

Being an immigrant has been an advantage in America, he says. It taught him to establish rapport quickly and to be resourceful. He calls it the “immigrant edge.” What the is “the immigrant edge?” Keep reading: Bedros Keuilian. 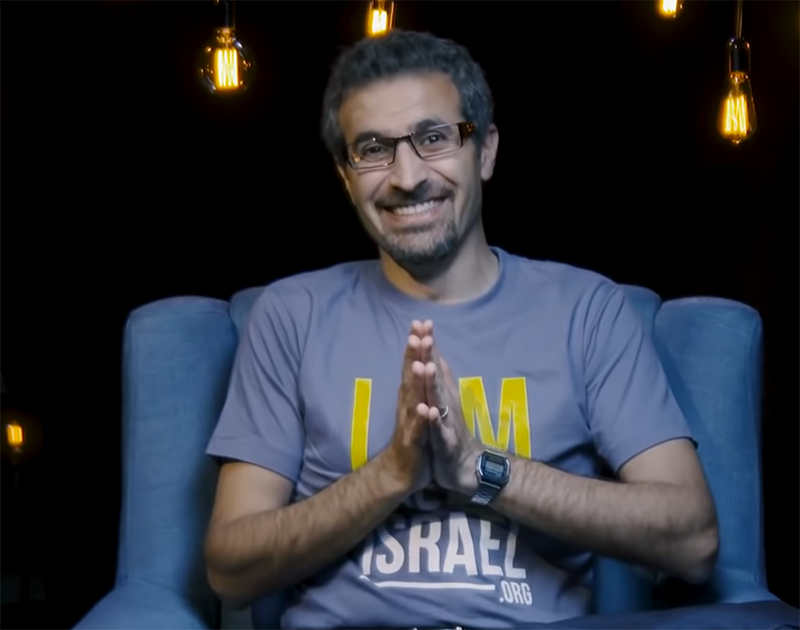 Every morning in school, Darwish shouted the customary class-wide chant repeated like the pledge of allegiance in America: “Death to Israel!”

As a Muslim in anti-Semitic Iran, Darwish hated the Jews but never knew why.

He graduated military school and became a commander in the Iranian army. He was moving up the ranks, but he acquired a nasty drug habit. “I became addicted,” he says on a One For Israel video on YouTube.

When he was discharged from the army, he got a fabulous job with great compensation.

But he wanted even more success, so he decided to go abroad where opportunities were greater. He made the dangerous journey from Istanbul to Bosnia and finally to England, where he applied for asylum.

On his application, he justified his need for asylum by stating he was a persecuted Christian.

This was a lie, only a ploy to increase his chances of being granted legal status in the West, where he enjoyed freedom and prosperity.

He realized that eventually he would be called to account for his version, so he decided to arm himself with knowledge of Christianity. Dutifully, he went to church. He filled his mind with the basic doctrines of Christianity.

Still, he felt no compulsion to accept Jesus as his Savior.

“My brain was full of information,” Darwish says. “But my heart was still dark.”

On the day of his interview, he asked his pastor to go with him, but his pastor refused.

“You are not a Christian,” the pastor told him. “It is all a lie (on your application). Yeshua asked you to stand on truth, and the truth will set you free.”

Darwish was outraged by the pastor’s refusal to support him. Why wouldn’t his pastor help him? He was now in very real jeopardy of being deported to Iran.

That night alone at home, he cried out to God. “If there is any God,” he prayed desperately, “show yourself to me because I can’t continue anymore.

Then something remarkable happened. God revealed Himself to Darwish. “In that moment, He healed me completely of drugs. He touched my heart.”

Darwish was born again, filled with resurrection power by the Holy Spirit. “That was a power just working in my heart,” he remembers. “I tried several times before to give up the drugs, but I couldn’t. But that time I asked Yeshua to start a new life, and He did.”

The next day, he confessed his lies on the application to the immigration official. His status change request was, naturally, denied.

But Darwish wasn’t completely without resources or hope. Most importantly, he had finally started a legitimate relationship with Christ. Embarking on a new life, he also was given a new legal strategy, one based on truth.

He appealed the summary denial of his visa application and was granted a court hearing.

By the ironic sovereignty of God, he wound up in a Messianic congregation. Darwish, the man who grew up hating Jews without knowing why, suddenly found himself in a body of completed Jews.

He even became part of the worship team.

When his court date came, the judge asked him what he had done the day before.

He had led worship. He had been reading Psalm 96, and he recited it to the judge and the court. Read the rest of Iranians hate Israel.

When he was only 7 and already showed signs of liking hip hop, a woman at church talked to Raúl García’s mother to warn her that rap was of the devil.

It’s a good thing Mom and Son ignored her. Today Raúl — known now as WHATUPRG — has literally exploded on the Christian Hip Hop scene, signing with Reach Records at age 21 without ever having made an album previously. RG (his stage name reads “What up, RG?”) is the face of the next generation of Christian rappers who are ministering to a new generation of fans.

“My parents have always supported me in my music,” RG says to NewH2O. “I know in my heart where I’m heading and where I’ve positioned myself allows me to speak to people and let them know it’s not about a bunch of rules but about His grace and His mercy and His love. So when I rap I want people to know that they’re not alone and there is grace for them too.”

RG is born of Mexican parents who immigrated (illegally) to the United States. He grew up in Gwinnett County, Georgia, where he went to church, listened to Christian Spanish rap and loved to perform at church functions.

Despite doubters in the same congregation, RG’s parents supported his musical inclinations and even paid for his first album to be produced when he was 14, a recording he now calls “trash.” 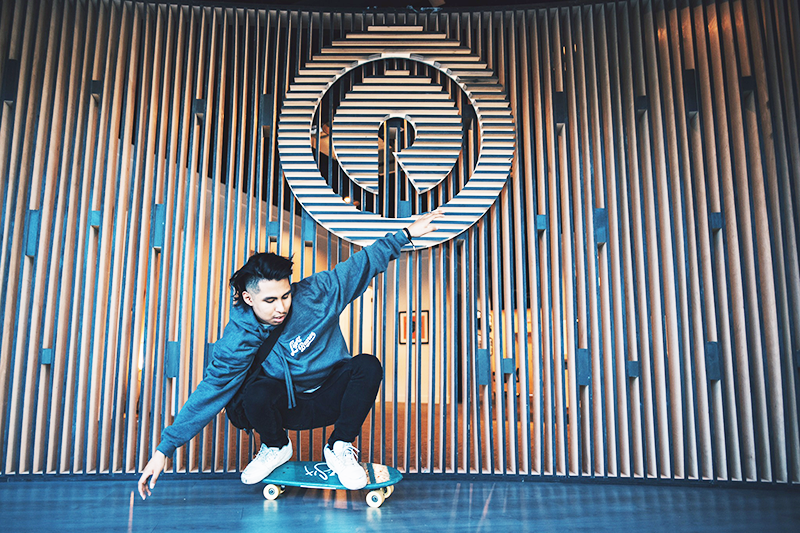 When he was 16, his dad was nabbed by immigration officers and deported to Mexico. This tore RG and led him to be outspoken on the divisive issue. “I’m still dealing with the emotional trauma to this day,” he tweeted.

It appears his dad is back home in Georgia, since RG tweeted about going vegetarian in 2017, only to be contradicted by his dad, who said they were eating carne asada. “I can’t be Mexican and healthy,” he quipped.

RG got noticed by CHH heavies when he filmed a video of himself and his friends at Walmart in 2017 with his song “Don’t Forget to Live.” The filmography was amateurish, but pros were impressed by the vocals and music. He started getting calls. 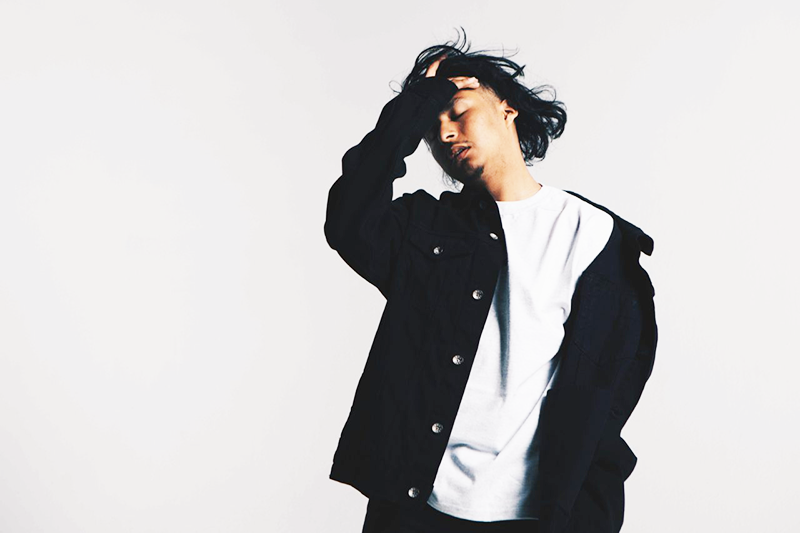 Soon he was nobigdyl’s Indie Tribe and was featured on Mogli the Iceberg’s song “Ride My Own” and others. Just months later, Lecrae signed him. He was making waves but was still an unproven quantity since he hadn’t dropped a professional album.

“On my 18th birthday, I was getting a 116 tattoo on my knee,” RG tells Trackstarz. “When I was turning 21, I was talking to my lawyer about the contract.”

RG’s blitz to fame has surprised even him, and he says he’s focusing on staying rooted in God. “God honors humility,” he says.

he fact he wants to stay low is refreshing to hear, especially when one contrasts that attitude with the braggadocio rife in secular rap, with artists boasting about their knife wounds and talk in hyperbolic terms about being “gods.”

In May 2018, RG dropped his debut album Pleasant Hill, which created a sensation. He hit #7 on iTunes hip hop sales. A Trackstarz interviewer said there’s not a song he doesn’t like on it. David Livick lists him among the Top 10 artists of 2018.

There are detractors, many of the historic fans of the 116 clique who don’t like the new direction of the label and want the Old School material. RG’s not Christian enough, some say. “STOP Imitating and Start innovating… what’s the point of copying the World, sounding, Looking and acting like them?” comments Leveled Head on the “Wesside” video. Read the rest about WhatUpRG Christian.

When the gang-banger was on trial for nearly killing her brother, Cynthia Santiago wrote a letter to the court asking for leniency.

“We are Christians. We believe in forgiveness,” said Santiago, 31, now an immigration lawyer based in El Segundo. “We prayed for him (the shooter). We prayed God transform his life. I’m not the person to pass that kind of judgment on another human being.”

Santiago said her brother got involved in a race-based altercation at 20th St. and Delaware in Santa Monica in the early 2000s, and he was shot with a 22-caliber gun from close range. One bullet shattered his jaw and another pierced his heart and lung, she said.

He was rushed to St. John’s where he lay unconscious for nearly three weeks. When he woke up, he asked about his kids. After months of physical therapy, he returned to normal life.

Santiago’s extraordinary plea for clemency is part of the troubled past of a Santa Monica once beset by gang violence. Part of the reason she chose law is because she saw her own parents, as working class residents, struggle to get sound legal advice for her troubled brother. Read the rest of the article.

Editor’s Note: Cynthia Santiago was the flower girl in my wedding 25 years ago. My wife and I lost track of her when we spent 16 years in Guatemala as missionaries. When I found her on Facebook 24 years later, I’m surprised to see her all grown up and a lawyer! I praise God she, coming from a family without college students, had the wherewithal to study and achieve a dream. It seems to me that her choice to forgive is extreme and compelling. Her choice to help the neediest who need help only makes me admire her more.