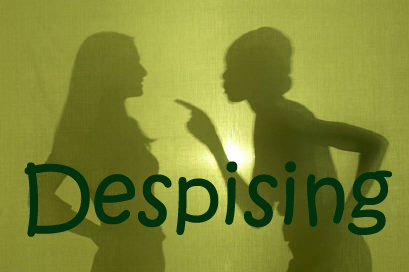 So — despite Jacob’s lies, deception, betrayal, disloyalty and other reprehensible behavior, he was chosen because Esau was worse.

Esau despised his birthright. He despised his call in God. He despised the need to separate himself from the world. As difficult as it is to believe, what he did was worse, so God opted for Jacob to carry the line of the raising of the nation of God’s people.

Do you see how bad despising (scorn, contempt, ingratitude) is?

America wishes for more, always more. There’s a good side in the drive to better our circumstances. There’s also a bad side when we criticize the good gifts God has given us thinking we deserve better. How many youth abandon the church because they “deserve” something better.

The irony is that Esau, seeking more, got less.

He wanted to eat, so he sold his birthright. He wanted a pagan wife. When that caused problems, he got a second one (which never was the plan of God).

God passed over Esau and selected Jacob to inherit the promises.

(Of course, he had to work Jacob over a bit, make him reap what he sowed for about 20 years to teach him NOT to sin. But at the end of the day, Jacob got the blessing of God.)