Isaac Perez descended into the inner regions of the earth, down a spiral staircase, through the forest, over a bridge to the place he had been told he would meet his animal spirit guide. Finally, a hawk with a penetrating gaze faced him.

“What are you doing here?” the hawk asked him. “You don’t belong here. They are coming after you.”

It was a strange message for Isaac, who sought to become a full-fledged shaman through practices he learned online, which resonated with his Mayan heritage.

It was strange for Isaac, the son of a pastor from a charismatic church, to be seeking supernatural experiences in the occult.

“The Holy Spirit worked somehow to tell me I didn’t belong and what I thought was my spirit animal was very much definitely the Holy Spirit telling me this isn’t it, you need to get out, this is not the place,” Isaac says on a Doreen Virtue video.

Isaac’s testimony shows you can’t blend New Age teachings and shamanism with Christianity and that Jesus Christ is the only way.

Isaac’s parents were both charismatic pastors. Isaac became a youth pastor, but when he began to have unanswered questions about the supernatural, he turned to shamans online.

“I thought that I really understood this,” he says. “God created nature, so why can’t I serve God but also you know just enjoy this, his natural beauty and all the work that he’s done and created.”

Isaac began to explore shamanism and thought that with his Mayan ancestry he could blend Christianity with shamanism.

At first, he got involved with drumming circles in nature, then he began using crystals and other New Age practices. He didn’t go to his parents for answers out of shame and guilt.

While he was involved in shamanism, there were works, like a sun dance, which was a dance including fire and self-mutilation in order to be forgiven for his sins and for God to hear what he was saying.

Beyond the Mayan Long Calendar and Carmaggedon 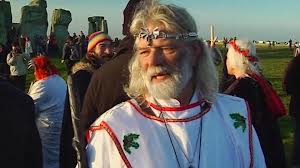 At Stonehenge, an end of the world party, yesterday

Even though I used to live in their mecca, the Mayan catastrophe yesterday failed to materialize. Now, would Roland Emmerich* please give everybody back their ticket money? We weren’t warned. We were swindled.

When crews widened the 405 FWY  they shut it down for a full weekend in July 2011 and predicted traffic snarls all the way to Paris. Telling everyone to stay home, they said it would be “Carmaggedon.”

I had an outreach to drive to, and the freeways were entirely empty. The next day the newspapers stated that Angelinos, by NOT using their cars for the first time in their lives, had made the “ultimate sacrifice.”

I took exception to that. The “ultimate sacrifice” no one I know would be willing to make: to die for a friend maybe, but to die lovingly, givingly, for an enemy, who would? The Christ of Christmas did.

f you stockpiled food, water, gas and bullets for the much-vaunted Mayan cataclysm, give it to the poor (not the bullets). Because the real end of the world is coming, but it’s not Carmaggedon. It’s Armaggedon. What you’ll need most stockpiled is Jesus in your heart.

* Emmerich directed 2012, a special effects phenom that grossed $770 million. It was based on speculations of a Mayan Long Calendar-predicted apocalypse.