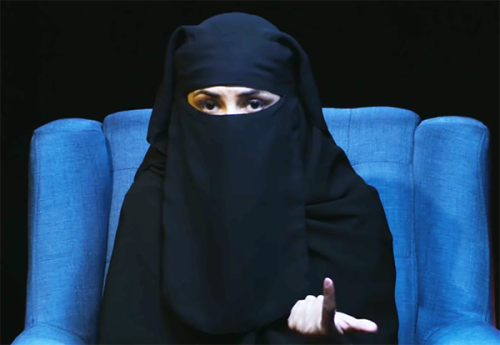 The Muslim girl was confused and didn’t know what was going on in the large crowd until they were pushed to the front and saw a woman tied up, sitting on a box, and a man next to her uttering a traditional prayer.

The next thing she knew the man pulled out a golden sword from his side and beheaded the woman. The little girl, her hand in her dad’s, began to tremble.

“If you don’t listen to the teachings we’re instilling in your life, this will happen to you one day,” her father told her sternly, as recounted in a One For Israel video.

In the dramatic video, the woman is dressed in traditional Muslim garb, including a hijab, and her voice is altered to thwart identification.

She was raised in Kuwait, a small oil-rich nation on the Persian Gulf whose population is 98% Muslim. Two of her uncles are imams, and one is president of a mosque. Five times a day, she prayed.

“The word ‘Yehudi,’ which means Jew, was instilled in me as a bad word, as a cuss word,” she says. “Yehudis should not exist. They should be killed. I never thought to question why would I hate them. I never met Jewish people in my life. They never did anything to harm my family.

“I just hated them. Just the word brought hatred in my heart.”

She had to learn the Quran and the Hadith, memorizing vast portions in Arabic.

During her younger days she even entered a competition of reciting a long chapter in front of Islamic leaders and teachers. She was proud to win second place.

But her dad criticized her for not doing better.

“Most of my life, I was alone, by myself, alone,” she says. “I was a broken person in need for love from my family but I never received it from them.

“God (Allah) is not a personable god to Muslims,” she says. “Allah does not say, ‘I love you,’ to Muslims.”

Then, Saddam Hussein and his Iraqi army overran Kuwait to take possession of its oil and start the unification process all Muslims idealize in the Quran. His soldiers raided homes, stole possessions, killed men and raped women.

Because of the carnage and suffering, her family applied for and was granted visas to the U.S. There her grandmother suffered a heart attack and two days later died at the hospital.

“I was devastated because I lost my best friend,” she remembers.

Her friend, Paula, seeing her saddened one day, asked her if she was OK. She burst into tears afresh.

“At that moment, only crying helped,” she says. Read the rest of Kuwaiti Muslim taught to hate Jews.