To win, you must surrender 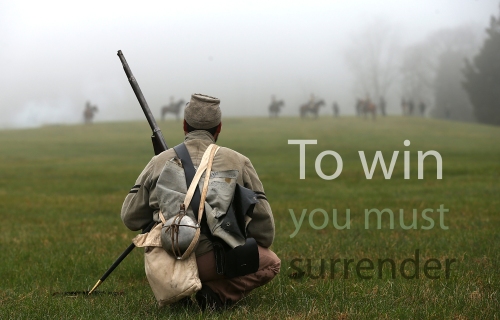 People resist the Bible because they can’t get the paradoxes. They feel like God is going to rip them off, that He’s a tyrant, a killjoy, a cruel taskmaster whose greatest delight is to snoop for mistakes and send lightning bolts — or pestilence, famine and bad luck.

If you don’t have a mind prepared to understand paradoxes, you’ll have a tough time. You’ll be snapping at God about “catches” and raw deals.

One of the great paradoxes is that we are in warfare. But the irony is that the way to WIN is to LOSE. When we surrender to God, we obtain victory on other fronts. When we fight against God, we lose on other fronts.