Gentlemanliness opens doors for a lady, shields her from the water spray of a car whizzing by in the rain, carries her bags out to the car for her.

When a man grows cold and distant, he drops off the natural manly inclination to protect.

When a woman hardens her heart towards her man, she stops cooking nice things for him. She grows frigid to his romantic advances.

Both sexes need to protect each other. Both sexes have weaknesses that the spouse is designed to cover. When protection fails in a marriage, a marriage is failing.

If you wonder what happened to the love of you life, start protecting again.

Posted on September 9, 2013 in inspiration

I can understand the terrorists.

I have felt their passion. I have risked my life for God. But the difference is they believe killing people pleases Allah. They need to get to know Jesus.

All this goes to show what an intellectual fraud the “comparative religion” folks have perpetrated. Maybe they should study “contrastative religion.” We are told that the older Boston bomber became more “devout,” then this.

As I become more devout as a Christian, I give of myself. I sacrifice. I love. I pray. I evangelize. I give money to the needy. I don’t kill.

Actually, atheists are all highly intelligent people, so their failing to discern between religious and economic motives behind so-called “Christian wars” is more willful than accidental.

Christ called his followers to lay down their lives. To turn the other cheek. Those who have taken up arms in the name of Christ are following their own folly, not Jesus. Yes, Popes asked for Crusades, but the guys who actually did the fighting were mercenaries seeking fame and fortune.

God calls us to carry our cross, not arms.

Again, it is willful neglect, not genuine, to fail to discern the clear demarcation between Old Testament and New. Christ, being the conclusion of God’s progressive revelation of salvation in the Bible, represents the maximum expression of God’s plan, the finality. Thus, several Old Testament norms go outmoded and are replaced by Christ’s law of love.  Ethical conduct is reaffirmed; such things as temple rituals, sacrificing animals, and violence are suppressed. I can understand a simpleton failing to grasp this, but not a smart guy who’s academically honest.

It is with great heaviness I write: We Christians bear much responsibility for the evil surge in our world. We have become lightweights, neglecting prayer in favor of “our best life now.” Let’s pray for Boston.

And let’s pray for the gospel to advance in all the world. 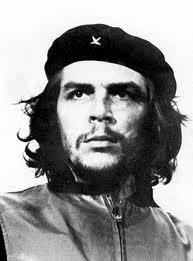 For decades, Che Guevara was the most maligned figure by the CIA. An Argentine instrumental in Castro’s Cuban revolution, Guevara stood for communism, the toppling of governments by “popular uprising,” even the overthrow of the USA. To be honest, his picture struck me with fear back in the day when I was a teenager. But the Cold War has gone, well, cold. A re-evaluation might be permitted without war-whipped paranoia. 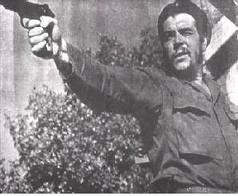 from the weight of wanting materialistic comforts, he fought unreservedly. His slogan, in Spanish in the title, is translated: “Towards (unto) victory, always.” Not even death would deter him from trying for triumph.

humanism, but you ought not to dismiss his life — such sacrifice, such fearlessness, such passion. Where’s the Christian nowadays who matches his commitment?

For Guevara, self-denial meant dying, executed by Rangers in Bolivia, where he had tried to spark

revolution. For us, “sacrifice” means getting out of bed to go to prayer. It means turning off the TV to read the Bible. Are we willing to go to the most God-forsaken lands to bring a revolution of Christian truth?

Nowadays, the insignia of Guevara has become watered down, a harmless symbol for adolescent rebelliousness. He’s become as mild as Pancho Villa or Bob Marley. My hope would be that our Christianity would retain its edge and not go mild.

His dad beat him severely to force him into a banking career and a sure income instead of music. But Johann Strauss II would not quit his passion, continued studying violin in secret and went on to become the king of waltz in the later 1800s to even surpass his father’s fame in Vienna, Austria.

When you decide to serve God, it doesn’t come with a promising retirement plan. The perks are few and not 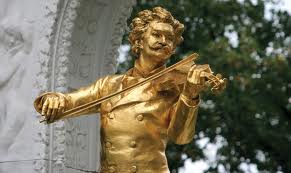 His statute in Vienna

usually monetary. No doubt family and friends shark-attack you and rail against the “unwise financial career path.” But if you pursue your calling, God will eventually take you unawares with blessings.

Even this tulip variety is named for him!

whipping, Strauss continued to believe in himself and pursue his love. Eventually he did quite well economically, composing over 500 waltzes and other pieces, including the famous Blue Danube. Listen here: http://www.youtube.com/watch?v=_CTYymbbEL4.

Go for the legacy, not the loot.

Odysseus‘ sailors landed on a Mediterranean island whose inhabitants feasted on the lotus fruit that was immediately addictive. Whoever savored its flavor, fell into a peaceful narcotic bliss, lay down by the ocean, and wanted nothing more than to consume lotus and forget family, future and fortune. 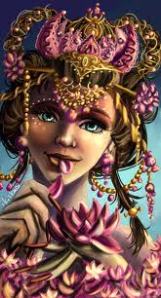 When I lived in Guatemala, we ate beans, rice, eggs and tortillas most of the time. Once a month, we ate meat. We had one car and worried about when we could afford new shoes. With this poverty, we lived on the edge — and that edge reflected itself in ministry on the edge, prayer on the edge. God moved powerfully.

Then we were forced to come back to Lotusland, I mean, the USA. And I have tasted the fruit of its  luxury. Definitely, our standard of life is higher (even though we live currently at the poverty level!!!) At the same time, I can note that my standard of prayer has dropped. I pray, but with not the same intensity. The edge is gone.

I wonder if America’s Lotus life, whose effect I can perceive in myself, dilutes the prayers of other Christians  as well. I wonder if the work of God is hindered by our lackadaisical praying.

Writing this blog has been harder than any other so far. They all brim optimism. This one feels like a confession. Before I struggled with prosperity; now, I struggle with prosperity. Can these musing stirs us to recapture the flame?

After some of his sailors ate the fruit and fell under its spell, Odysseus stripped them away with force and tied them to their benches until they could sail far enough away and his men returned to their senses. What will it take for us to pray passionately?