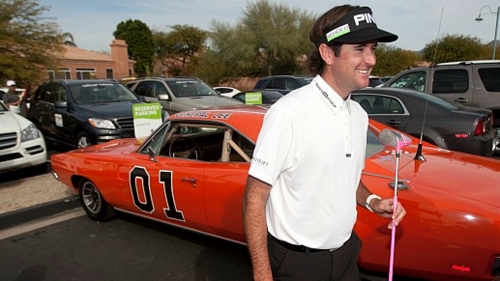 At an auction, Bubba Watson bought “the General Lee,” a car made famous by the Dukes of Hazzard T.V. show.

He grew up wearing knickers sewn by his grandma, endured the rage of his Vietnam vet father, and learned to play golf smacking a wiffle ball around the house.

Bubba Watson, 37, arguably golf’s most colorful character, won the Los Angeles Riviera tournament Feb. 21, and he credited Jesus and the Bible with the win, his ninth PGA tour victory since 2010.

“I have a lot of fears in my life, which, as I’m reading the Bible, I’m not supposed to have — but I do,” Watson told the New York Times. “Me changing as a person has helped my golf, not my swing.” 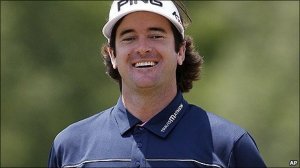 It wasn’t too long ago that Watson would lose games in his brain. He struggled with insecurity, melted down after a bad shot, and looked for people to blame when things went wrong. He used curse words and rankled other players with some unfriendliness.

But with the help of his wife, his caddie, and fellow Christian golfers (who meet weekly at a PGA Bible study), Watson is overcoming the temperamental side of his personality. 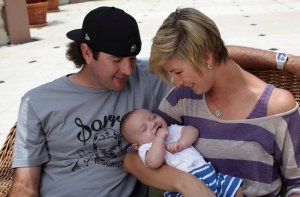 With his wife and first adopted child

“We’ve been working on it, a hard, slow process,” Watson said in Golf Digest. “Instead of swing thoughts and swing, it’s all about the mind for me. It’s staying patient, and having Teddy (the caddie) in my ear. Teddy’s been a blessing. It’s been a struggle over five years, but we’re working in the right direction.”

His twitter account is telling. Followed by 1.54 million, @bubbawatson describes him in this order: “Christian, husband, daddy, pro golfer.”

Watson told BillyGraham.org that he is “getting more in the Word and realizing that golf is just an avenue for Jesus to use me to reach as many people as I can.”

His walk with Christ started when he was 19. A neighbor invited him to church. It was his first time in a service. “I went to church with her a few times,” he told CNN. “I listened, thought about, gave myself to the Lord.” 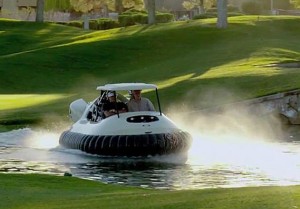 His hover craft golf cart that also hovers over water.

During college, his church attendance tapered off, but in 2004 he got baptized with his new wife, Angie, and renewed his faith.

On his first date with Angie, a college and professional basketball player, she advised him that she couldn’t bear children – and Watson told her that was fine. To date, they have two adopted kids, Caleb and Dakota.

After his baptism, he drifted away from God. Then his caddie yelled at him for his stormy behavior on the links, and Watson realized he needed to take things more seriously.

“I’ve been reading my Bible and getting stronger in my faith,” he said.

Today, Watson is a very visible and vocal Christian. After the won the Master’s at Augusta for the first time in 2012, he said, “I thank my Lord and Savior Jesus Christ.” 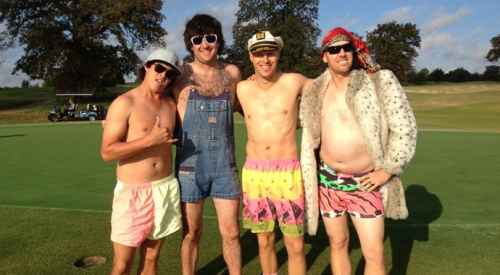 The Golf Boys with Bubba Watson

Famously, Watson never received any more golf instruction than from his dad when he was a tyke using a sawed-off club. That’s astonishing because the lefty hits the ball farther than pretty much anybody in the PGA (over 350 yards). And he can put spins on the ball that produce tree-rounding curves that will make you think he has Jedi powers.

To win the 2012 Master’s, Watson hit his ball out of some pine trees in a boomeranging hook that landed on the green only a few feet away from the pin of the second hole. It would seem that whacking that wiffle ball around the house taught him about spin. Read the rest of the story. 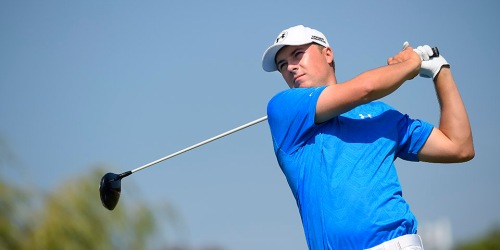 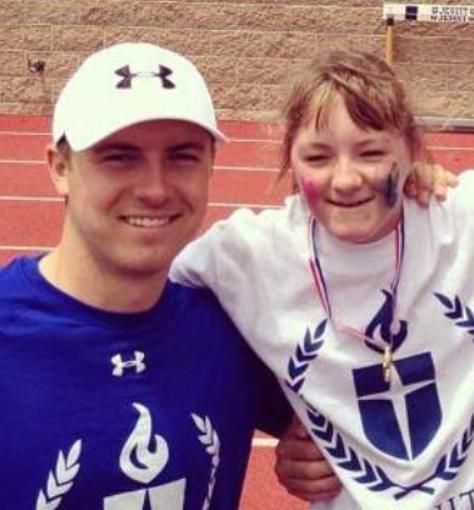