The dead bodies hanging by a noose on public streets and markets disturbed Ramin Parsa, a child growing up in Iran during the strict Shiite Muslim regime of the Ayatollah Khomeini.

“They executed people in front of children,” Ramin says on a video posted to his channel. “I could not eat for two weeks, I was so shocked.”

When Khomeini and the anti-American Islamic radicals staged a coup and ousted the Shah of Iran, they implemented a stringent form of Islam that included public executions of alleged enemies and self-flagellation while walking barefoot through the streets.

“The newspaper is Islamic. The media is Islamic. Schools are Islamic. Society is Islamic. Everything you can see and hear is Islamic,” he says. They want to dish in doctrine. They want to brainwash you. We had no magazines, no books. They showed the caricature of the Israeli soldiers, killing Palestinian babies and they sowed the seed of hatred in our hearts.”

Deeply motivated to live for Allah, Ramin went to the mosque every morning at 5:00 am for the earliest of five callings to prayer a day. Every morning at school, they shouted, “Death to Israel! Death to America!”

But when his dad died, life dried up for him. He was no longer able to go to school.

“I started questioning my faith,” he admits. “Is this really the truth that we believe? I started going down and down and down into hopelessness, into depression. I left all my friends. I left all my family. I left everybody that I knew and I locked myself in a dark room, turned the lights off and was thinking about past and present and future.”

Death haunted him after his father’s death. It haunted him because Islam offers no real assurance that you will be admitted into Paradise. The true Muslim is constantly warned to do more, to pray and fast — and even join jihad — to curry Allah’s elusive favor and be granted entrance into the afterlife..

“Out of fear I said, ‘What is gonna happen to me when I die?” he says.

Aside from the public hangings, he also saw men’s backs slashed and bloodied for drinking alcohol. Mohammad prescribed public punishments to instill fear in the populace.

The Revolutionary Guard routinely prowled the streets. If you were wearing a T-shirt with the image of someone, they took it from you and punished you. Islam stringently prohibits artistic renditions of any person or animal as a means to avoid people falling into idolatry. This is why so many of the earliest architecture has ornate geometric patterns but no other artwork.

In spite of it being illegal, every house has a satellite dish, which is a great alternative to the non-stop religious propaganda pumped out over government-run channels.

So he flipped on Trinity Broadcast Network. He heard about Jesus. Everything he heard through Islam about Jesus was contradicted: The Son of God did indeed die for our sins; he was more than just a prophet.

Importantly, he rose from the dead.

Ramin didn’t immediately believe. He had been taught it was “baloney,” so he turned it off. Read the rest: Who is Ramin Parsa? 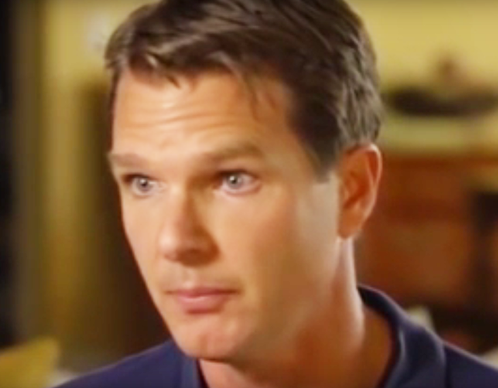 Instead of being happy and fulfilled, Dr. Greg Lehman was always frustrated and angry – despite having an envious lifestyle that included ski trips, luxury cars, and a fancy home.

“I was going from one thing to the next: buy a new car, and when that didn’t do it, I’d go out and buy new clothes or take a trip,” Lehman told OTG Ministry. “I went though hobbies. I did triathlons. I took up wine as a hobby.”

Lehman was a proud atheist. He’d cruised through medical school. He ran a profitable practice, had a wife and two kids. Despite the accouterments of success, contentment eluded him.

“It was a combination of you’re sad, you’re empty. At the same time you’re angry, you’re frustrated because you’re like, ‘Why? What’s wrong with me? Why am I not fulfilled? Why don’t I feel like I have achieved what I worked my whole life for?’” he explained.

Dr. Lehman tried to mask what he was feeling inside. “You’re embarrassed. You’re not going to tell anyone. You keep it inside. So what you wind up doing is taking it out on other people.”

Lehman “took it out” on his wife and family.

“He was good but he had a short fuse,” his wife Ruth told OMG. “He was arrogant. He was always right.”

If he was irritable with his family, he was even more annoyed with his Christian neighbors, because he thought their lifestyle didn’t line up with the Bible.

Setting out to expose his neighbor’s hypocrisy, he began to arm himself with ammunition by reading the Bible. He would confront their inconsistencies with their own book.

Instead the power of the Word confronted him. He was dumbfounded by the Gospels’ claim that Jesus was God in the flesh. “That quickly got my attention because I realized if that did happen, it was the most important event in history,” he said. “I forgot about the neighbors and set out to find out if this really happened.”

After weeks of researching, he realized everything about Christianity hinged on the resurrection.

As a doctor, he tried to rule out options, weighing hypotheses that could explain away the resurrection: “The apostles stole the body. It was a hallucination,” he considered.

After carefully examining the theories of the naysayers he came to a startling conclusion. “None of them were credible. The only thing that could make sense with the historical facts of the way it was set up with the Roman guards was that the tomb was empty and He actually rose.”

He was impressed by Luke, a fellow doctor. To finish the article, click here. 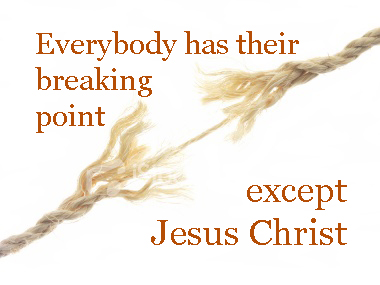 Eve broke when she saw the fruit.

Peter broke when he very nearly was arrested along with Jesus.

Moses broken when the Israelites complained one too many times.

Noah broken when he planted a vineyard.

Abraham broke when he feared for his life over the matter of his wife.

Jonah broke when he got an unwanted assignment.

Jacob broke when an army of 400 came after him.

Paul broke when Barnabus dared to question his leadership over the question of taking Mark along with them.

Mark broke when things got rough.

Solomon broke when he loved many women.

Rehoboam broke when he listened to his friends instead of wise counselors.

Esther broke when the pressure was too great.

My transformation into Barabbas

Here’s the finished product. I’m standing with Jesus and Malchus, who lost his ear to Peter’s quick sword (but Jesus healed him immediately).

It started with a beard and some mascara to darken the eyebrows.

Somebody said I looked like Abraham Lincoln. Our “makeup room” is actually a classroom of the Lighthouse Church School in Santa Monica. 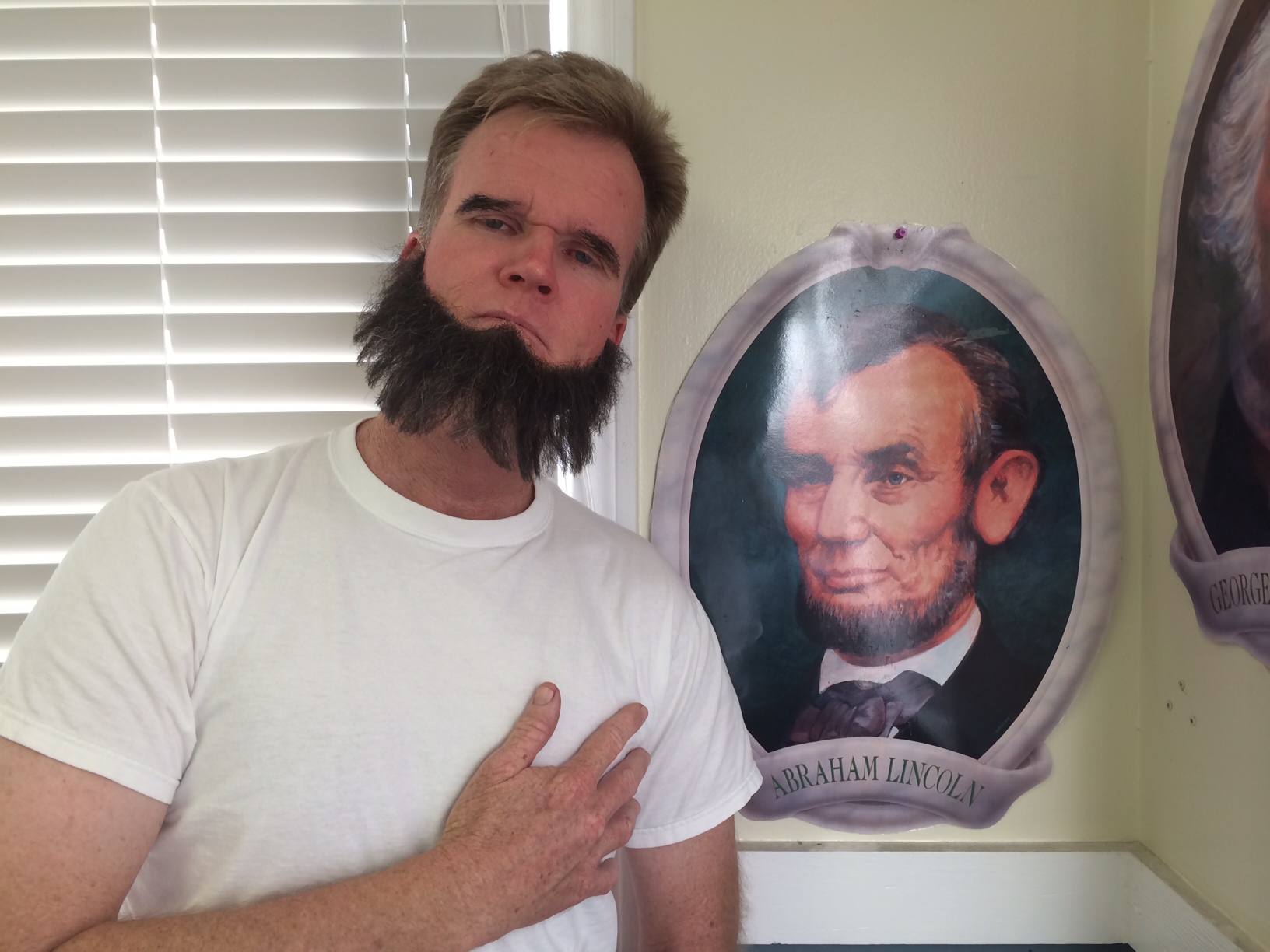 I love acting in church plays! When I was a missionary-pastor in Guatemala, I got all the starring (villain) roles. So when I returned to my church in the States, I thought I’d be a sensation.

But when I gave my first rehearsal performance, the faces of the directors said otherwise. I managed to survive the production and was never asked again. I realized I wasn’t a great actor after all.

Then, the asked me to be Barabbas. The way I see it, they were sitting around asking: “Who’s big and ugly to play Barabbas?” They thought of me.

Then they darkened up my face.

This one includes Caiphas.

When I was little, I didn’t understand what was good about “Good Friday” when basically they brutalized Jesus. Now I understand.

Maybe they’ll give me more acting roles in the future. I told the director that I do deranged villains best. I wonder why those roles come easy for me. 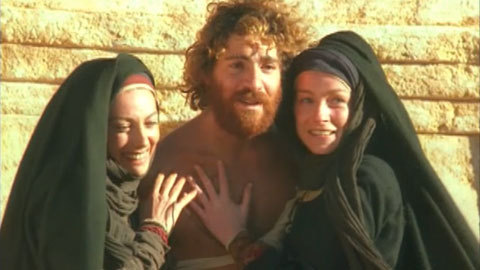 The reason why Jesus specified “Lazarus” before giving the command to resurrect is otherwise the whole cemetery would have risen from the dead.

That would have been impressive! But no all the resurrected would have had relatives to cut off their grave clothes and feed them. It was best to keep things simple.

A different kind of zombie

A different kind of zombie. This is the me, the man behind the Mustard Seed Budget.

Ummmm, I guess I shouldn’t loathe zombies so much.

In my generation, zombies were the bad guys. They were to be feared.

To my chagrin, when I come back 16 years after being on the mission field, and now zombies are good guys. Everybody is fascinated by them. They dress up like them for Halloween. Lots of movies and video games are about them.

So I’m trying to understand the cultural shift. And as I think about zombies, I realize they’re kind of Christian. I mean, what is Christianity about except coming back from the dead.

But unlike the zombies of popular culture, I’m not going to be bloodied and gored. In fact, I’m going to have the best most youthful version of my body, made of glorified matter, in Heaven.

Accept Jesus into your heart today. Ask forgiveness of your sins. Begin to pursue God in your thoughts and actions. Be a real zombie.

The ground, the cross and Heaven

Happy Resurrection Day! Keep your feet on the ground, your heart on the cross and your mind on Heaven.

The resurrection trumps all arguments

You can observe the atheists working overtime to dismiss the resurrection. It proves Christianity. Here’s why: 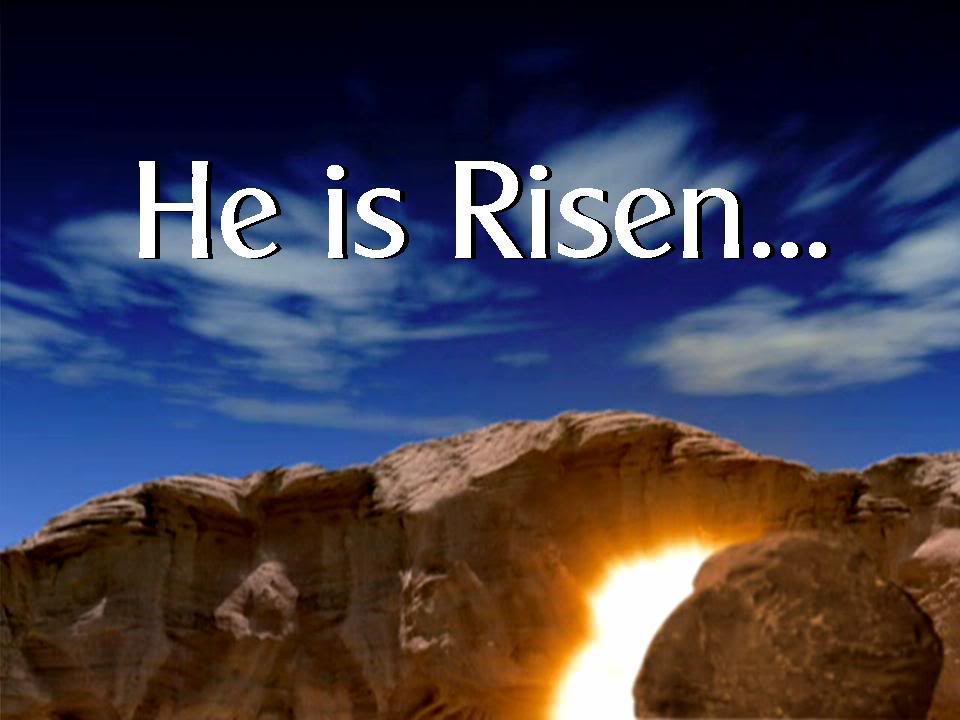 Resurrection Day is a great holiday for Christianity. Though I’m not a professional apologist, I believe the raw, unadulterated evidence is highly in favor of the resurrection being true. My blog has hosted some pretty lively discussion in the past and welcomes all comers to join the debate, though I ask everyone refrain from curse words and treat each other respectfully. I believe in comparing ideas, not ad hominem attacks.

With phenomenal power, God resurrected Jesus. No lesser power is at your disposal when you pray.

He has called you (to) … his incomparably great power for us who believe. That power is like the working of his mighty strength, which he exerted in Christ when he raised him from the dead and seated him at his right hand in the heavenly realms. — Eph. 1:18-20 NIV.

Ephesians makes it plain. Your prayers have access to NOT an inferior power but the very same might of the resurrection. Now, here on Earth. Is there anything impossible for this power that even undoes the ultimate finality? Devils are dismayed. That’s why they sweat the overtime furious workload to keep you out of prayer — at all costs!

As soon as you prayer, the same power that resurrected Jesus will be channeled toward your needs. Hell trembles at the thought! I’m no historian of revivals, but what I know is that they were fueled by prayer. Do you want revival? Pray.