She went to impact Guatemala, but Guatemala impacted him

As Maria, an 8-year-old girl, walked through doors of the clinic, I couldn’t help but notice the sadness in her eyes.

Maria approached the pediatric station where we asked her what was wrong. Her aunt was there to explain that Maria had not been eating much for months and wasn’t sleeping at night. 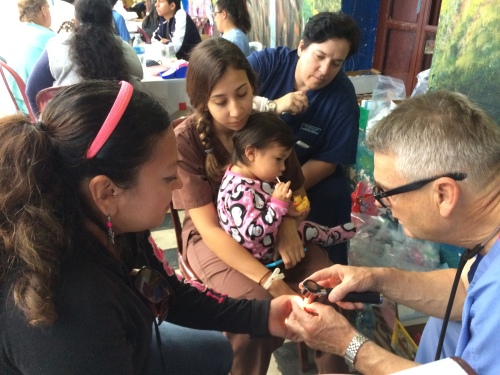 Cindy Gutierrez holds a baby as Dr. Bob Hamilton examines a patient. This is Lighthouse Medical Missions in Guatemala.

Maria’s aunt informed us that she had been physically abused and neglected by her mother because of her skin color. Maria’s mom despised the fact that Maria was of darker skin tone while sisters had fairer skin.

She was called “ugly” and “not good enough” by her own mother for years until finally the mom just walked out and left her with her aunt.

I could see how heart-broken she was. When I told her she was beautiful she started crying because for so long she was told she was ugly by someone who is suppose to love her and accept her.

Going on a Lighthouse Medical Mission to Guatemala was my first time traveling without my parents. As a high school student, I was so scared to go at first and was questioning even going. I made about a million excuses on why I shouldn’t go, but then God gave me a trillion reasons why I should. So I got time off from the Lighthouse Christian Academy, a Christian high school in Santa Monica, to give of myself.

I had been praying to God to give me a sign. I didn’t have the money at the time to cover all the expenses of the trip, but in less than two weeks my friends and family covered all the expenses.

When I first arrived to Guatemala, I felt a little homesick. I missed my parents so much already (I know, I’m such a big baby) but it wasn’t long till I felt at home. The church welcomed us all and treated us like family.

It was heartwarming and touching to see how giving everyone was despite them not having much to give. Read the rest of the article.