Sk8erpat now is famous in football too 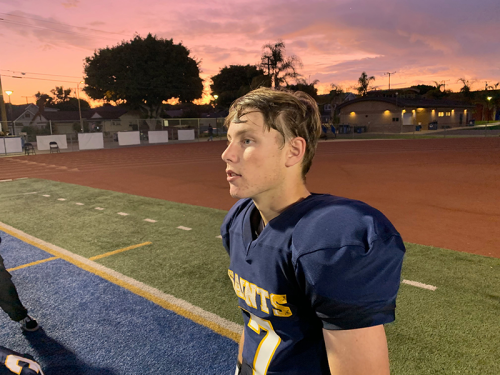 He could have mangled his fingers, broken his toes, fractured his ribs… any number of ER trauma from high school football.

Pat Cannon — known on Instagram is Sk8erpat with 19K followers worldwide — wants to go pro skateboarding, so what was he doing playing football for the Lighthouse Christian Academy?

On Saturday, the senior scored a touchdown, handed off and passed for touchdowns as quarterback to help the Saints win 34-30 against Cal Lutheran Wildomar in LCA’s season closer.

He gambled with jeopardizing his true passion for somebody else’s. 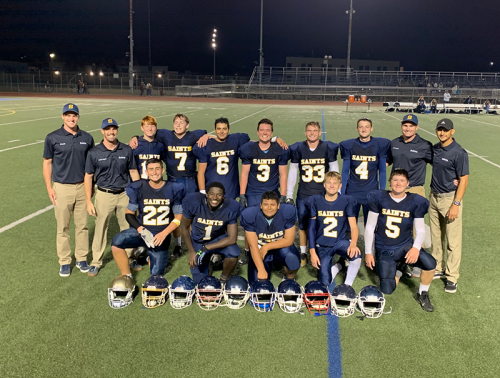 The Saints’ high hopes for its 2019 season were dashed in the first game of the season.

That’s because Levi Photenhauer, a slick runner with unflagging tenacity, went down with a torn ACL. It was as if LCA had lost its queen early in a game of chess.

The Saints still had Seniors Marcus Scribner and Hosea Ashcraft to marshal the defense and ramrod the offense. But their core horsepower was cut by one-third. LCA only won two games all season.

Out of the crater of the first game, coaches asked soldiers to rise up and (attempt to) fill the gap.

Josie Bowen was a notable revelation. The sophomore was a beast on kickoff returns and tackling. He scored a TD Saturday that was called back because of an illegal block.

Sophomore Steven Lahood, who grew like Gulliver over the summer, rose to the challenge and became an offensive threat and a stolid defensive player. He blocked a key pass in the final moments of the game to assure LCA’s victory.

Rob Scribner, an unobtrusive freshman, exploited his unmenacing frame, to surprise with touchdown catches. David Hutchinson, a newbie to football, became a solid lineman and tackler. Brandon Farah learned how to do in real life what previously he had done only on video games, and Luke Mammana performed pinpoint kicks under pressure.

“For their touchdowns, they had to drive it all the way down, and time went off the clock, and we scored fast. Bam, bam, bam,” Josh said. “We’d get up, and maybe they’d make a mistake, and we’d get the ball back, and that’s when the game was played. I think the key to the game was we had a lot of people that we’re involved. Everybody made great plays.”

In the first five minutes, Lighthouse scored two touchdowns. Rob intercepted a pass, and immediately Marcus caught the pass on LCA’s first play to burn defenders and run for a touchdown. Then LCA came in for hard hits on kickoff, provoking a fumble, which Brandon recovered. On the first play, a pass to Hosea brought another TD. Read the rest of sk8erpat on football.