The significance of this article is for Christians. Previously, the high school I work at (Lighthouse Christian Academy) formed its soccer teams haphazardly, as an afterthought among too many things to do. The new winning streak represents years of effort to actually build the program. This will attract students to our school and, consequently, to Christ.

With back-to-back victories, the Lighthouse Christian Academy soccer team has found its feet to rewrite recent history of missing playoffs.

Without normal forward Will Clancy, the Saints subbed Abraham Morales into the striker position, and the new LCA student rewarded coach’s confidence with two goals, to bring the 4-2 victory over Westmark School in Encino yesterday.

“I never pictured myself making a goal, let alone two,” the sophomore said coyly. “But after I made the first one I was determined to make the second.”

Morales was deadly on the left, scoring his brace within the first 20 minutes. 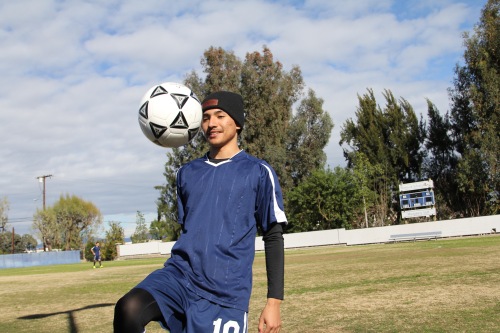 Westmark scored next with some brilliant passing between two Lions stars. With the ball at the goal line on the left, one player found unmarked in the box his counterpart, who didn’t bungle the shot. It was 2-1.

In the second half, Turk Erhan Meric, a fleet-footed sophomore, ran up the right on a through ball from midfielder Colby Thomas to get behind the Lion’s defense and shoot powerfully home.

Again Westmark sent the ball to a player in the area, and he punctured the net. It was 3-2.

With the minutes ticking away, Lighthouse kept pressing to bury the match. Senior Shane Berry launched a throw-in into the area on the narrow field, and a Lions defender trying to clear the ball also controlled it with his hand.

Erhan Meric, a magician with the ball.

On the resulting penalty, Senior Adrian Brizuela, a powerhouse in the Saints midfield, blasted the ball past the goalie to remove the match from reach of the Lions. It finished at 4-2.

Coach Jack Mefford, who is also Lighthouse’s principal, credited the Saints’ progress with the time players have worked together. With a number of new students coming from schools other than its feeder middle school (Lighthouse Church School), the teammates needed to learn each other’s strengths and weaknesses.

“They are working together. Especially this game, we just began to gel,” Mefford said. “They’re starting to know each other play with each other better. We’re growing in confidence.”

Tuesday’s victory came on the heels of a win Monday, improving LCA’s record to 4-1-3. The Saints are beginning to feel the excitement of possibly getting a playoff birth for the first time anyone can remember.

Abraham Morales was deadly in front of goal.

On Monday, Lighthouse beat 2-1 Einstein Academy for Letters, Arts and Sciences from Santa Clarita for the second time. The Penmar Park game put on exhibition the Saint’s powerful defensive line, which has speed, technique and physicality.

Senior Tex Hagoski, at stopper, made crucial saves and passes despite playing with an injured foot. Since his preferred sport is football, he brings a fearlessness and muscle that will intimidate some forwards. Don’t underestimate his speed.

At sweeper, Abraham Kennedy has been a potent defender. Big and strong with a lifetime of soccer experience, Kennedy, a sophomore, doesn’t win balls by hand-crafting them. By mass production, he foils opponents’ attacks.

On Friday in the away game against Einstein, Kennedy led the charge to overturn a 0-2 deficit with a stunning rocket from 40 yards. After seeing the shocker, the Saints seemed moved to believe they could beat their opponents and rallied to finish 3-2.

There’s no surprise the sophomore Alex Cervantes, given his soccer pedigree, holds the left back position impeccably. What surprises is how well senior Shane Berry contains on the right. He’s not really a soccer player. His game is basketball. But his quickness and the similarities between basketball and soccer have helped him adapt.

LCA goals were produced by Brizuela and Meric, locked in a friendly competition to see who scores more by season’s end. They are tied at six goals each. Einstein got a late consolation when refs awarded a penalty kick for a foul in the box.

With the newfound momentum, the Saints face Concordia in Sylmar Friday, their penultimate season game.

*Photo: Adrian Brizuela goes for goal against Westmark yesterday. Credit: Jamie Roman, who is a sophomore at the Lighthouse Christian Academy. Jamie wrote this article for the Santa Monica Patch here, and I edited it. I always re-post my students’ articles on my blog since I’m heavily involved in the final product.