Muslim militants in Nigeria brutally executed 11 Christians on Christmas, capping a year-long “open season” that saw more than 1,000 Christians killed by Muslims who considered it their right and duty to do so.

Donning orange jumpsuits reminiscent of the Libyan Muslims who killed 21 Christians on a beach in 2015, militants from the Boko Haram-related Islamic State West African province either shot in the back of their heads or slit their throats on video. Targeting of Christians on Christmas is common in the Muslim world.

“The message is to the Christians of the world,” a spokesman for the group says in both Arabic and Hausa in the video, according to Christianity Today. “Those who you see in front of us are Christians, and we will shed their blood as revenge for the two dignified sheikhs.”

Those two are Abu Bakr al-Baghdadi, the former ISIS caliph killed by US troops in an October raid in Syria and Abu al-Hassan al-Muhajir, his purported successor, killed the next day, Christianity Today reported.

These types of attacks occur because many Muslims can’t conceive of a secular government and therefore think America is a “Christian nation.” According to the Koran, a nation must be governed by religious leaders.

With a population of 200 million, Nigeria is evenly divided between Muslims and Christians, but with the advent of al-Qaeda and ISIS, extremists have been agitating in marginalized zones to take over semi-secular governments through Africa and Southeast Asia.

In its report, Britain’s Humanitarian Aid Relief Trust estimated that 6,000 Christians have been killed by Boko Haram and Fulani Herdsmen since 2015. Another 12,000 left their native areas and sought safety elsewhere as refugees.

“Islamist Fulani militia continue to engage in an aggressive and strategic land grabbing policy in Plateau, Benue, Tarab, Souther Kaduna and parts of Bauchi state,” the HART report stated. “They attack rural villages, force villagers off their lands and settle in their place — a strategy that is epitomized by the phrase: Your land or your blood.”

The Nigerian House of Representatives has classified the slaughter as a genocide but has failed to employ meaningful measures to halt it, according to reports.

“Every day we carry new corpses to the cemetery,” a Nigerian pastor said. “They kill farmers. They destroy our homes and churches. They kidnap and rape women.” Read the rest: killing of Christians in Nigeria.

Latinos, burned by politics, are converting to Islam 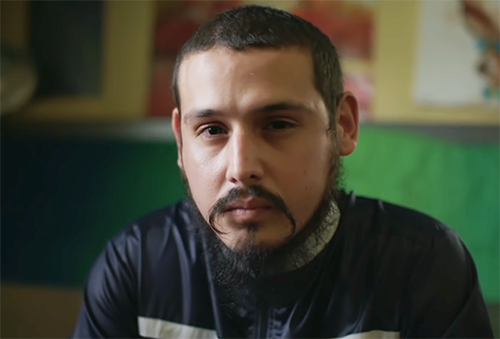 Disaffected by anti-Latino rhetoric in politics, a growing number of Hispanics are converting to Islam in Houston and elsewhere, finding solidarity with other maligned groups, according to a Vice video on YouTube.

In America today, there are as many as 250,000 Latino proselytes who have renounced their Catholic upbringing and now adhere to the tenets of Mohammad, says Rice University Sociology Professor Craig Considine.

“With all the racism and xenophobia happening in this country, where are the Christian leaders who are taking a strong stand against it?” says Considine, who is himself Catholic but reaches out to Muslims. “A lot of Latinos are saying, ‘Maybe Islam is offering something that Christianity doesn’t offer.’”

Islam conquered Spain in the Middle Ages but was stopped in its northward advance at the Pyrenees Mountains by the formidable army of Charles Martel. Almost eight centuries later, Ferdinand and Isabella expelled the Muslims out of Spain fully by 1492 in what as known as the Reconquest.

For the 34% of American Catholic population that is Latino, the battle for the hearts and minds of Spanish speakers is back on.

Jaime “Mujahid” Fletcher was raised in Columbia and Venezuela before he immigrated to America at age eight. His parents wanted a better life for him, but he fell into gangs and drugs. When he searched for solutions, he gravitated to the Koran.

Today Fletcher is the founder of America’s first Islam in Spanish Center in Houston, which has a thriving Latino Muslim congregation. They also mass-produce and distribute Islamic propaganda. Their online proselytism reached 14 million people during the month of Ramadan, Fletcher says.

“I looked for answers in so many different religions. Someone gave me the Koran, and the more I read it, the more life made sense,” Fletcher says on the “Minority Reports” Vice video. “My mother thought I was brainwashed when I became Muslim because I stopped drinking alcohol. I stopped going out with girls. I let go of all this stuff.”

Four months after his conversion to Islam, Fletcher was asked by his leaders to speak to Telemundo and Univision, Spanish channels in America, on behalf of Islam after Muslim terrorist hijacked planes and crashed them into New York City’s World Trade Center twin towers.

“They asked me to explain why Islam is not what people were thinking,” he says. “That some Colombians sell drugs doesn’t make me a drug dealer. That some Muslim goes and commits a wrong act, shouldn’t make me feel bad about being Muslim.”

His own family became very upset at his shifted loyalties, Fletcher admits. “How could you be part of that?” they asked him.

Raul Sanchez is a Mexican immigrant and DACA Dreamer in North Houston who converted in 2011. His family, like many other Latino families of converts to Islam, disowned him.

Because he lacked papers, he could only find under-the-table jobs, such as washing dishes for $5.00 an hour. The exploitation is what drove him to find solidarity with other marginalized people, he says.

“That’s when I really started getting the idea of what is Islam, how deep it was, and how it wasn’t what the media was portraying,” Sanchez says. “Being Latino and Muslim is a double whammy for me. I’m going to be attacked from all sides.

“My mom kicked me out of the house and threw all my clothes out,” Sanchez says. “She said I was joining a terrorist organization and they were training me to kill people.”

Eventually his mom visited the community and was won over. She apologized for her earlier rejection of her son and his coreligionists because she saw him feeding the homeless and doing other positive activities. She also converted to Islam.

Rice University’s Considine urges dialogue, not demagoguery, when competing for the hearts and minds of Latinos against Muslims in America.

“We are having a hangover from 9/11,” Considine says. Read the rest about this troubling trend of Latinos converting to Islam.

Only a year? Whistle blowers wonder why ‘lone wolf’ jihadist let off easy

A Phoenix man inspired by ISIS to convert to Islam and carry out a lone wolf attack was sentenced to one year in prison and four months probation — a sentence so light that anti-terrorist groups were left scratching their heads.

“Only a year? What do they think this man will do in a year? Become a loyal, stable, productive citizen?” wrote Jihad Watch. “It is much more likely that, once his jihadist sentiments are reinforced in prison, as they will be, he will come out more determined to kill in the name of Allah than he ever was.”

Part of the problem is the nature of the accusations, which lacked traction under U.S. law and could only be prosecuted under Arizona’s tougher anti-terrorism law.

The fellow Phoenix residents who attempted to shoot up a cartoon exhibit in Garland, Texas.

Derrick Raymond Thompson, 31, who calls himself Abu Talib Al-Amriki, posted pro-ISIS comments online and tried to buy a semi-automatic gun. Investigators found no concrete plans to carry out the “lone wolf” attack, though it was speculated based on his Google searches that he wanted to carry out a shooting at a Catholic midnight mass on Christmas.

““We need to get down with this ISIS sh*t,” Thompson wrote on his Google+ account, which he titled “Talib Thompson.” Among the hundreds of jihadist-related Google searches police uncovered via warrant, Thompson looked up “midnight mass,” “martyrdom vs. suicide” and “Fatwa on killing civilians.”

In response to a YouTube video discussing a terrorist attack in Garland, Texas, Thompson uploaded a comment: “Islamic State is officially in America. The war has begun.” 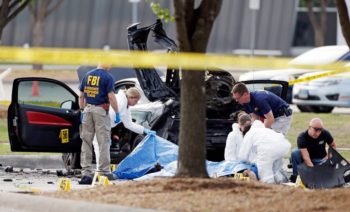 The assault on Garland didn’t go well for the attackers.

In the Garland attack, fellow Phoenix residents Elton Simpson and Nadir Hamid Soofi drove to Texas to attack participants in an exhibition of cartoons about the Prophet Mohammad, but they were killed by a Garland police officer as soon as they arrived and opened fire. Muslims believe artistic renditions of Mohammad are acutely offensive due to his prohibition about making images.

The Muslim population in Arizona has grown to 120,000 in recent years and is projected to represent 35 percent of the state’s population by 2030, the Phoenix New Times reported.

Prosecutors called Thompson an “avowed jihadist” in court documents prior to his arrest in December of 2016. Despite being prohibited to buy or own a gun because of a previous felony conviction, Thompson approached a seller on BackPage.com in January 2015 in an attempt to acquire a firearm, a deal that fell through because Thompson was out of town on the day of the sale and the seller transacted with another buyer. Read the rest of Muslim terrorists from Phoenix.

It mystifies me to no end that atheists accuse Christians of being an evil religion. The Bible says, “By their fruits, you will know them.” My church just realized a medical clinic in Guatemala, giving meds, giving life. Meanwhile, the extremists show what their religion has to offer.

Love’s the answer. What was the question?

This one is not my wisdom. It comes from http://justmebeingcurious.com/ So thanks for him for allowing me to share it here.

It certainly appears to me that another prominent religion is based on hate, but Christianity, whose adherents get killed around the world and then forgive, is based on love.

This is how you know that white supremacists are NOT Christian. They are in hate, not love. They reflect those who crucified Christ.

How do we reach a generation that gets further away from God by the day? Love. How do we Christians — not our secular government — respond to nations who send terrorists to wreak carnage? We send missionaries. We send love.

How do we face bitter accusing people in the church? Do we descend to their wickedness? No, we must respond with love.

Love is the answer. It is so much the totality of the answer that we can even forget the question.

I believe in a world where we can all live in peace, where we can debate, not kill over, our differences of faith. But I am disturbed by reports of apparently millions (?) of Muslims who support Al Qaeda or ISIS.

I’m reaching out to my Muslim friends to explain to me why there is so much violence, hatred and killing in Islam?

The brother of two of the Christians decapitated by ISIS in Libya says the atrocity has only “strengthened our faith” in Jesus.

“Since the Roman era, Christians have been martyred and have learned to handle everything that comes our way,” says Beshir Kamel. “This only makes us stronger in our faith because the Bible tells us to love our enemies and bless those who curse us.”

His comments, translated into English by subtitles, were made live by phone to host Maher Fayez on the Christian television show SAT-7 ARABIC, which is broadcast in Arabic, Persian and Turkish across 22 countries in the Middle East and North Africa.

When asked about forgiving his brothers’ killers, Kamel calmly says, “Today I was having a chat with my mother asking her what she would do if she saw one of ISIS members on the street. She said she would invite him home because they helped us enter the kingdom of Heaven.”

Read the rest of the article: Forgiveness will prevail over Islam.

Tagged beheaded in Libya, Coptic Christians, Egypt, forgiveness, ISIS, Islam, terrorism, what it means to be a Christian