Untiringly aggressive, Tex Hagoski shut them down in the field.

They played their hearts out — and at the final whistle Lighthouse Christian Academy had executed the most improbable upset in the league, defeating touch-perfect New Roads 3-2 in varsity soccer.

With girls, freshmen, and inexperienced players on the team, LCA Saints are

Only our team has girls in our league, but with Tori Scribner it doesn’t make a difference.

understandably bottom-dwelling fish. But somehow this season, they believed in themselves, winning four and tying one. Friday’s game was the crown jewel of the season. New Roads left the field in despair.

These kids who played with unaccustomed verve teach us a lesson in life. 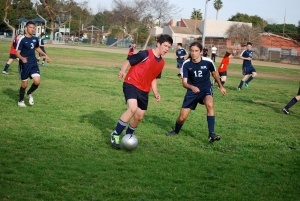 No matter how many failures, no matter what the man-to-man analysis, you can prevail with spunk and belief.

When you go to prayer today, when you minister, expect the victory. Whatever your shortcomings, whatever your handicaps, remember God grants triumph. Faith is key. Last year, we lost every single game.

For the full story, read http://www.thelighthousechristianacademy.com/saints-embarrass-in-big-upset/

6 responses to “Formerly scavengers, rising up the food chain”