Pregnant from rape, Jennifer decides to have the baby

She was accosted in January 2014 while staying at a small hotel in a college town. There on business, Jennifer never realized she was being followed until she turned around to close the door to her hotel room.

“It was so snowy and windy that I wouldn’t have heard his footsteps even if he had been stomping,” writes Jennifer Christie in a first-person account of her ordeal in Lifesite News. “It happened so fast. I got the door open, turned around to close it, and he was there – a huge man.”

Her first reaction was confusion. She never had time to process the danger and feel fear. The monster punched her in the face. Apparently he dragged her into her room and raped her. Mercifully, she doesn’t remember that part.

Later she was found in the stairwell. “I don’t know why I was there – maybe I was trying to go for help,” she notes.

In the post-rape treatment, she tested negative for HIV, gonorrhea, chlamydia, syphillis, herpes and other STDs. But they didn’t check for pregnancy.

A month later she was scheduled to work on a cruise ship. Two days into the trip she came down with dysentery. After antibiotics did nothing to cure it, she checked in at the local hospital while docked at Cartagena, Colombia. An ultrasound revealed she was expecting a baby.

Back on the ship, doctors and health care workers tried to reassure her. It would be easy enough to fix and resume her normal life, they said – if she aborted her baby.

“I spent the next week listening to a team of very well-meaning doctors and nurses console me with how “easy” it would be to “take care of it” — to kill the child.”

But Jennifer is a Christian who holds a firm conviction that the baby forming in her womb is a human life. One doctor in particular, though well-meaning, was “more vehement” than the others in pushing abortion, she recalls. Read the rest of the article. 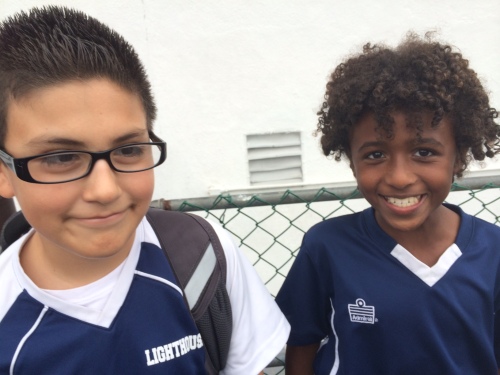 Some of my beginning players at Lighthouse Church School

My star soccer player lost the ball eight times in Lighthouse Church School‘s middle school loss against Crossroads B. His repeated futile attempts to penetrate towards goal with individual juking runs had me rolling my eyes. If something’s not work, try something else. There were other players open, ready for a pass.

Maybe he didn’t trust the other players. Since he’s the best, his instinct is to keep trying what has worked before. Unconsciously, he’s afraid if he passes, they’ll lose the ball. But Crossroads’ stout defense stopped him every time.

I’m not a demure coach. I yelled for him to pass. And he did pass finally — straight to the opposing goalie. No one was near to make a run on it. I don’t like sarcastic soccer.

Previously, we lost 0-7, but I was happy because everybody tried their best. Yesterday, we lost 0-4, and I was livid because we self-destructed — namely, the best player played the worst.

There is lesson here for the church. You must trust others, depend on others. I don’t care if you are the star player. The church doesn’t work without delegation. If the person fails, keep trusting and passing them the ball. They will learn eventually, and the team will convert into a winning team.

If you’re not going to ever pass me the ball, I’ll stop making runs.

After being a Christian for more than 35 years, I can’t really remember anyone ever say this: I need to give more.

No, through more than three decades of rubbing elbows with Christians, most often I hear people brag about how much they have already given. Usually, they compare themselves to others and point out how superior their giving us.

When someone gives quietly (without blowing the trumpet in announcement of his gift, as Jesus said), it inspires me to give.

When someone brags (and usually there’s an undertone of bitterness, as in: they wasted my gift), it’s completely uninspiring.

This Christmas, give without bragging and bitterness. Give God gold, frankincense and more.